Today we will share the story of Dokhra handcraft

The name ‘Dhokra’ has been derived from the Dhokra Damar tribes, the traditional metal smith from Bengal and Odisha. The craft story of Dokra has really captivated us with its delicate artefacts and intricate designs in the metal that still retains the charm of the craftsmanship of the artisans who devote their time in making these unrivalled pieces of art. 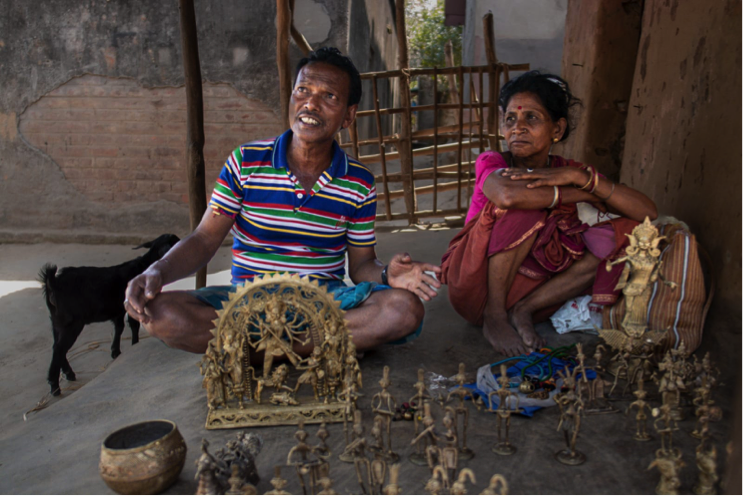 Dhokra is an antique form of art which is made of non-ferrous metal casting using the lost-wax casting technique. This technique of metal casting is primitive and has been practiced in India since Indus valley civilisation. 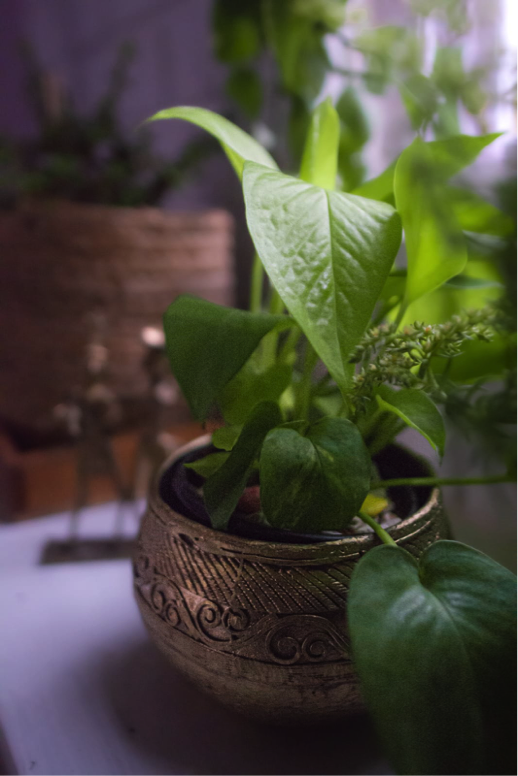 Most of the original craft-makers extend across many parts of India mainly the Dhokra art is popular in the tribal belts including Bastar in Chhatisgarh, Bardhhaman, Bankura, districts of West Bengal, Chittabori of Andhra Pradesh, Mayurbhanj, Khurda districts in Odisha, Betul district of Madhya Pradesh. Hence, this beautiful metal craft is now found all over India. These art forms combine small figurines of horses, drummers, tribal deities, and plaques. 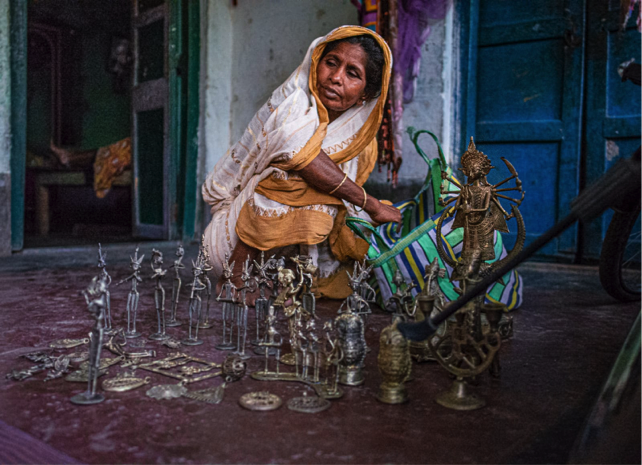 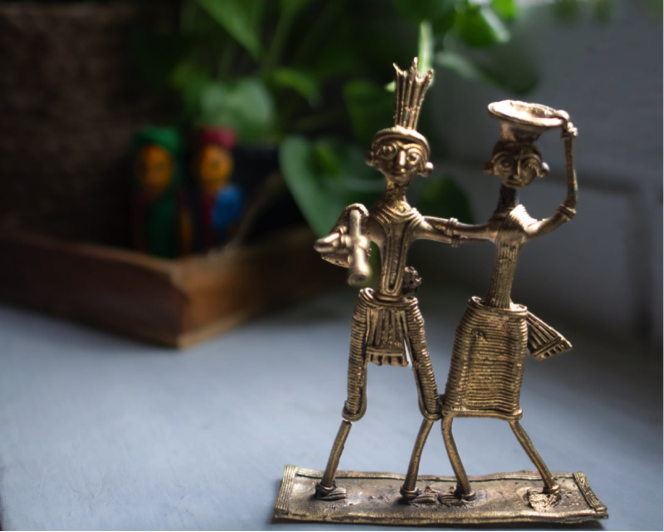 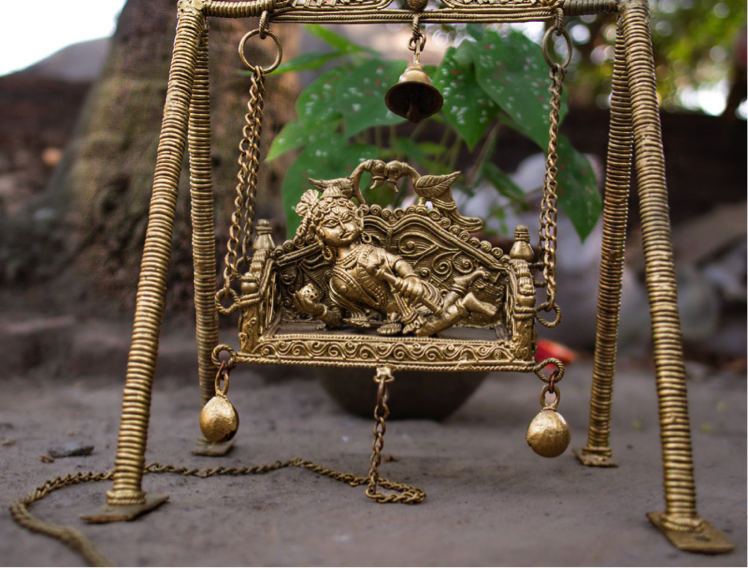 Alongside this, Dhokra art is also used to make accessories, jewellery, utensils. The craft is distinguished by its rustic look, fascinating motifs, vivid and unique patterns.

The making of Dokhra in itself an ornate process and needs much effort to give the art a complete form. Firstly, the craftsmen prepare a clay core sculpted in the shape of the craft which they want to make. Next the clay core is covered with a coat of beeswax. Then the outer layer is shaped and engraved with distinctive decorations and simplicity. This is the part where it requires a core focus from crafters side. 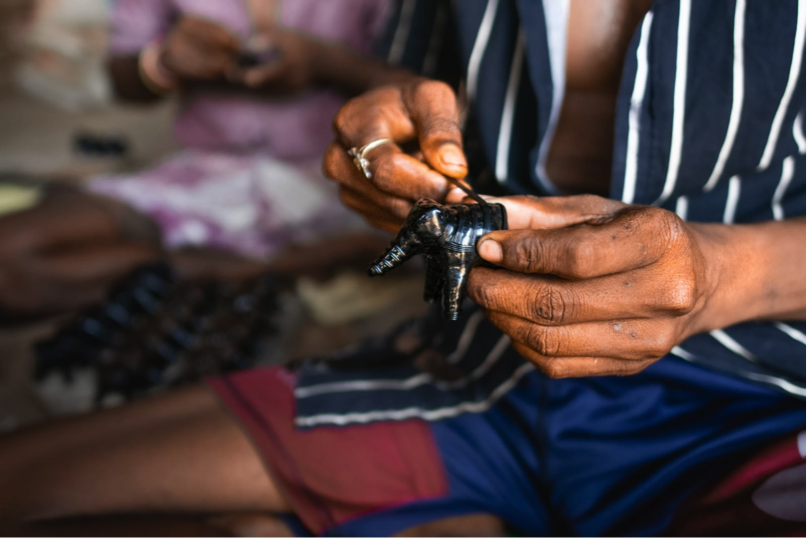 Next, the wax in turn is again topped with clay. This makes the external mould while the inside clay core makes the internal shape. Then the melted metal is poured into the mould. The melted metal replaces the wax which is drained out through the drain ducts. The liquid metal hardens between the inner core and the outer mould taking the shape of the wax. The outer mould and the inner core are then removed and the metal figure is then polished and given a shimmering finish. The main part of the process is that a cast can be used only for one figurine. It takes a lot of effort; concentration and an entire month are required to finish the single artefact. Craftsmen rely on materials like wax, resin, firewood from the forest, riverbed clay, and a firing oven made by digging a hole in the ground. It is really the hard work that every artisan gives to create a masterpiece with very limited resources. 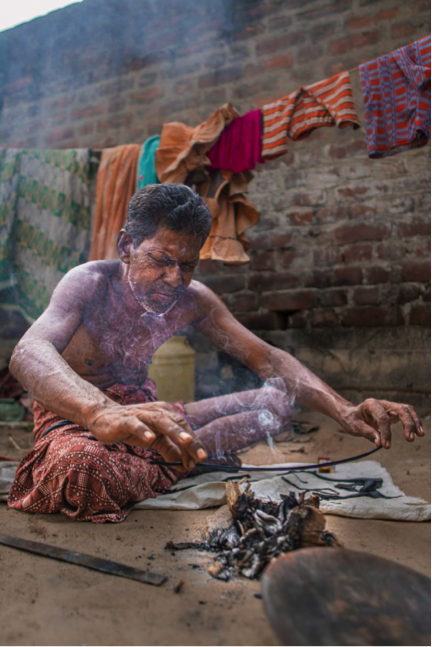 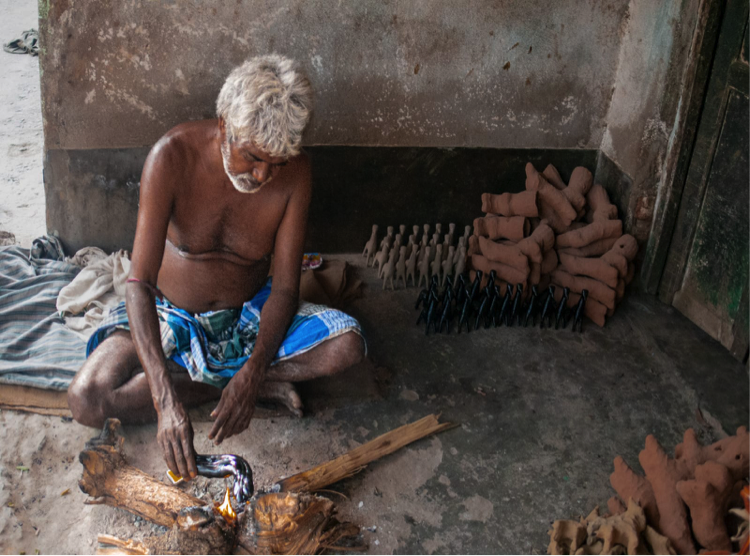 Sadly, the artists who are involved in this ancient art hardly get any appreciation, value of their craftwork. But recently, many social enterprises have taken an initiative to provide a platform to the artisans, so that they can focus on the development of local arts and culture. 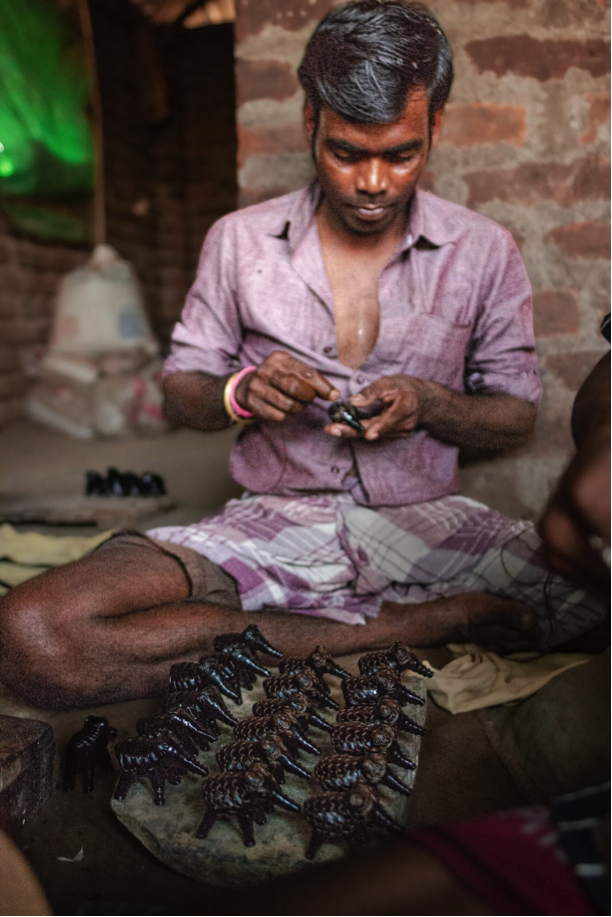 Our short visit to Dokhra village –

Dariyapur is a beautiful village with green paddy fields, greenery all around that is soothing to our sore eyes and has fresh air to breathe. It is located near Guskara in the Bardhaman district of West Bengal. The place is easily accessible from Kolkata by road, or you can travel by train as well.

In Dariyapur, there are 70 families of artisans, who live in the Dokhra village community and practicing the art. The good thing you get to see in this village, everyone is an artist. Not only the men are experts here but the women and even their children are so supportive in making Dokra figurine. The villagers are all of the Karmakar castes and their craftsmanship is truly inspiring and remarkable.

We visited the village in April this year. Sanjay Karmakar and his family hosted us and showed us around the whole village. Then he took us to his house, offered us tea, and displayed many figurines, jewelleries. Those were really beautiful artefacts with intricate design portrayed our Hindu deities and tribal culture.

The villagers were very friendly and warmly greeted us. They helped us to understand the making process of Dokhra craft. It was a big opportunity for us that we interacted with individual families, know-how their culture, past history of the craftwork.

“A true artist never loses faith no matter how hard he goes through” said one of the 16yrs old boys, “my father is my inspiration”.

There are many good stays and eateries at very affordable costs near the village. But make sure you carry your all ID proofs including marriage certificate as well. This is mandatory for couple travellers.

The name ‘Dhokra’ has been derived from the Dhokra Damar tribes, the traditional metal smith from Bengal and Odisha.