Mr. Pathak had retired as a Deputy Inspector General (DIG) of the Border Security Force (BSF) about 10 years back. He was now well settled in life. But the boredom of complete order and perpetual silence in their three-bedroomed flat kept him ill at ease. He would often think wistfully how this very flat would be chaotic but full of lively sounds of laughter, when his children were young.

Mrs Pathak knew all about his food habits, personal likings and the timings of his regular medicines like the back of her palm. She could keep his blood pressure and diabetes under control by giving his medicines with robot-like regularity.

The topics of common interest had almost vanished from their lives since they had achieved whatever they wanted in life. There was nothing more to look forward to. So, now they would only wait through the year for their grandchildren to come home for a fortnight every year-end. But still there was a small problem. Their grandchildren would giggle at their pure Indian accent.

The only time some spark would return to their lives was when they went for a yearly get-together outstation with Mr. Pathak’s batch-mates. They were all retired senior BSF Officers. Last year they visited Renukaji in Himachal Pradesh.

The central attraction of that place was its beautiful long lake nestling between two waves of tall mountains on both sides.

They could really let their hair down during such trips. They behaved as if they were still under-trainee officers in a hostel during such meets. One afternoon when everyone else was enjoying their afternoon snooze post-lunch, Mr and Mrs Pathak sneaked out of their hotel room and headed to the lake. They sat side by side in a small pedal boat that they hired for one hour and pedalled leisurely. When they reached the centre of the lake, they stopped pedalling. Their arthritic knees felt too tired to go any further. Their knees needed rest. At that mid-afternoon, youthful holiday-revellers were not around in other boats to disturb the peaceful atmosphere of the lake. Pathaks sat quietly and allowed the gentle breeze to take their boat adrift.

The water, just under the lake’s bank, on both sides of the lake, looked dark green by reflecting the dense forest on the mountain face. The water in the centre mirrored the azure sky, punctuated by white pieces of fluffy cloud lazily floating away to some unknown destination.

The crests of gentle ripples sparkled like diamonds in the mild winter sunlight. The tiny waves, coaxed by the playful breeze, kept rhythmically hitting the sides of the stationary boat…whish….splash ….whish…..splash…whish….

At a distance, a deep dark water crow with its long snake-like neck continued to dive time and again underwater – as long as it could hold its breath. A blood-red dragonfly hovered around the boat for some time and finally sat on the bow (the front tip) of the boat. When no one disturbed it, it slowly lowered its pair of double wings. It started cleaning its huge pale blue composite eyes with its two forelegs.

After half a minute, the cleaning was done. It took off again to join three other greenish-yellow dragonflies, frolicking just a foot above the water surface. Gradually, the nature’s magic started casting its spell over the elderly couple.

Sitting side by side on the boat, they watched the opposite banks with a far-away look in their eyes. Their minds were busy reminiscing olden days. The naughty wind was trying to ruffle their salt and pepper receding hair.

Mr Pathak looked at his watch. The one hour he rented the boat for, was about to be over. He said with a sigh, ‘Let us go’. They headed back to the jetty.

The rotating wheels splashing under the boat’s bilge (the bottom portion of a boat) did all the talking – all the way on their return journey.

A Tribute to the Creator of Fridenstal

A Summer Family Holiday made special at Fridensatal, a swift get away plan from the Hot Summer of Delhi. With my extended family, I visited Friedenstal, the Peace Valley, from 11th to 12th Jun. During my short stay, I truly appreciated the resort. Let me tell you why?

This enchanting place has been scooped out of a dense forest and curated by professionals, directed by the creative mind of the owner, who is sensitive to a visitor’s every need, like a gracious hostess.

Her personal touch is omnipresent everywhere in the resort.

It is indeed a peaceful valley in the nurturing arms of mother-nature. I find it difficult to describe the place justifiably. I would instead encourage everyone to experience it. 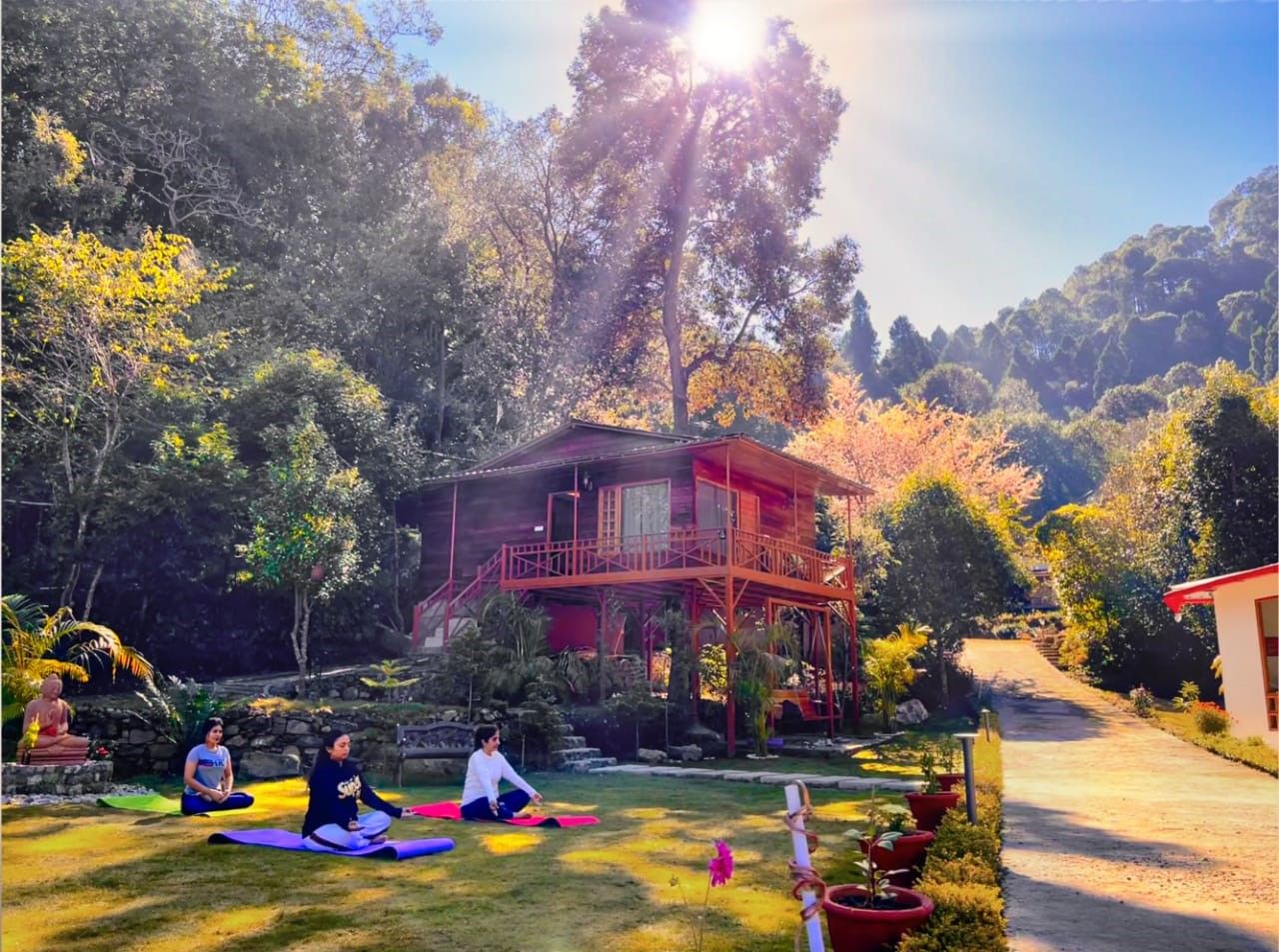 People say that home is where the heart is. The owner knows the way to the heart of a guest. A guest cannot help falling in love with this place. 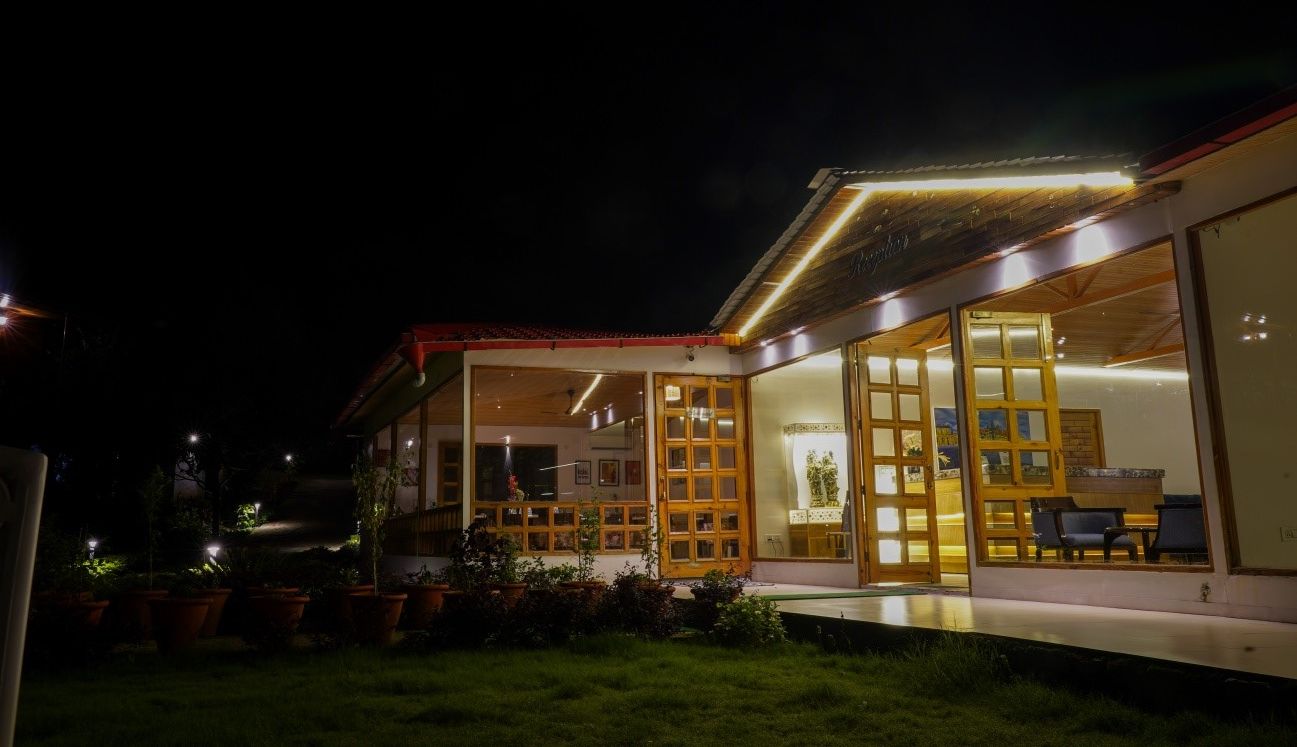 The rooms are not lavish in size. But the optimum space usage and the log house look with defused lights makes the rooms attractive.

One finds everything that he may need at his elbow. There has been an excellent combination of aesthetics and technology in the tastefully furnished rooms perched atop steel pedestals. 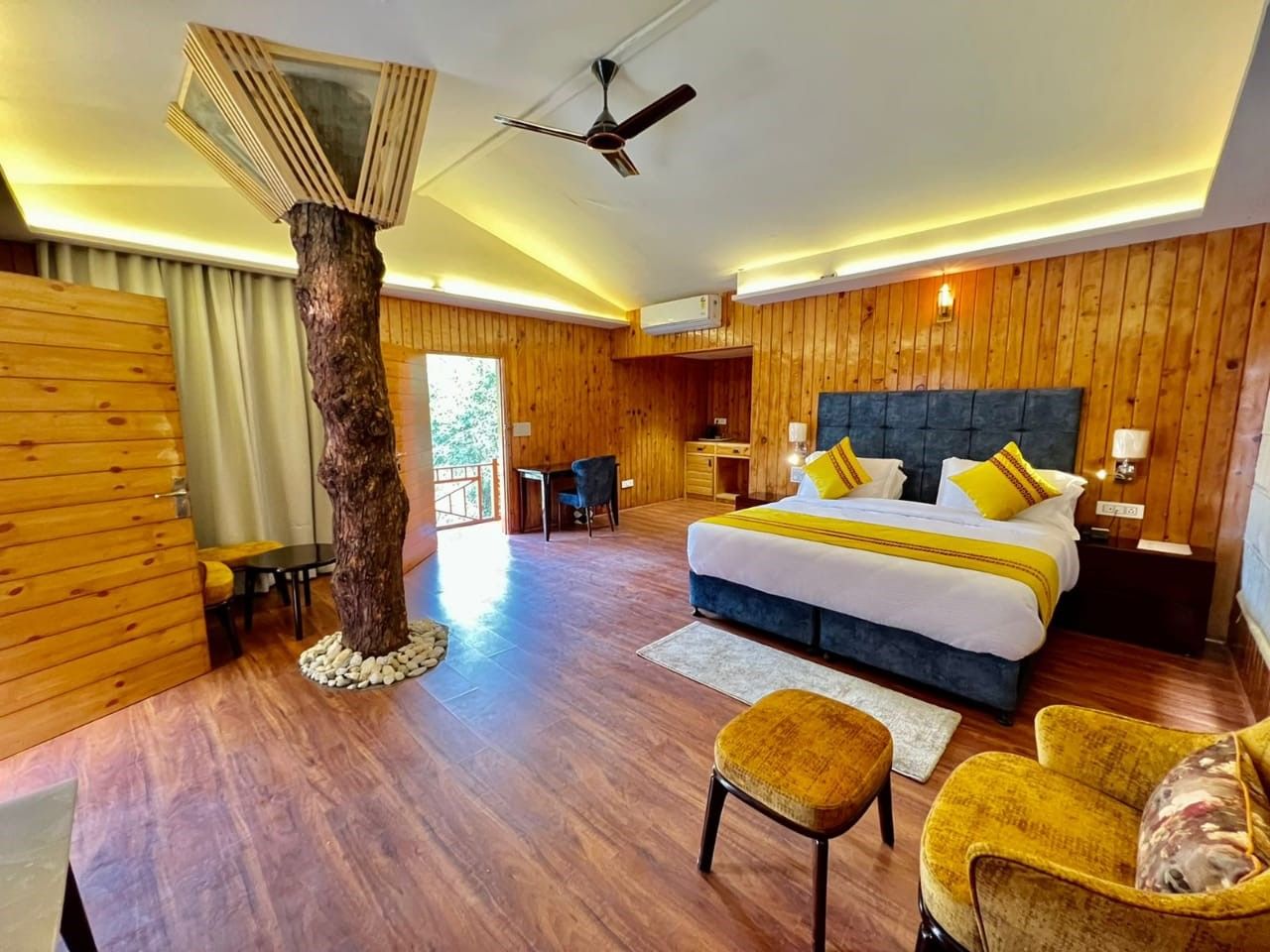 For the more adventurous a tree house has been built. A specious living space has been created around the trunk of a living tree. The tree fills the tree-house with natural fragrance at all times. 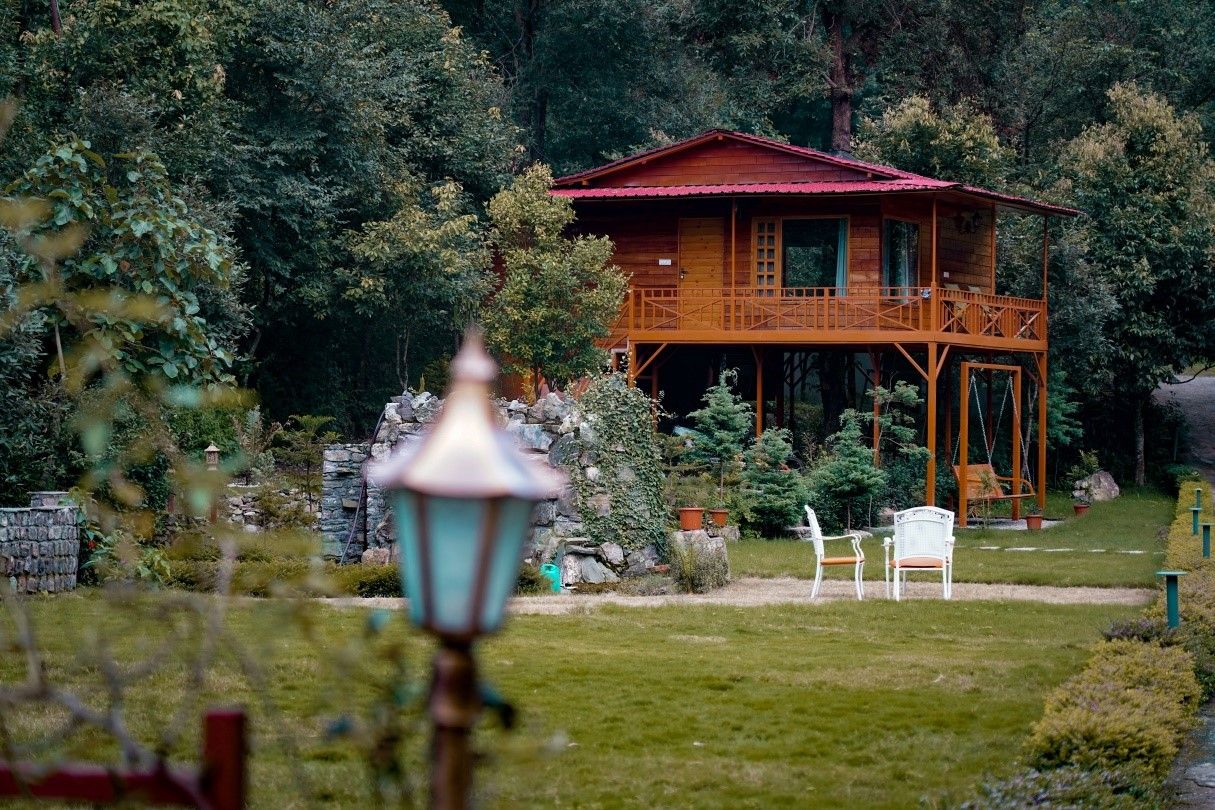 Friedenstal caters for all ages. For the senior citizens, there are cobbled pathways to walk around, relax on manicured lawns on garden chairs, or sit with a tray of hot tea on the balcony attached to every room.

For lovey-dovey young couples, there is a swing and a few strategically placed sit-out areas under tall trees. Many indoor and outdoor games are available to keep children occupied. There is an isolated place from where bird lovers may watch and photograph their winged friends discreetly.

If someone is fond of butterflies, he can trek about a few hundred feet up the hill and meet Mr Peter, who has maintained a reference Museum of hundreds of butter fly specimen. He would be delighted to share his deep knowledge of butterflies with anyone who is keen to know.

Security is everyone’s concern. One feels protected and safe in this resort.

The place is covered with solid wire netting all around the property to ward off wild animals. Powerful flood lights lit up the entire area after sun-down.

The staff is the backbone of any organisation. The best infrastructure will fail if the team is not dedicated, hardworking and well-behaved. Manager Ravindra Biisht has a small handpicked group of workers in this resort.

Under Ravi’s leadership, the team members are ready to go out of their way to satisfy every customer’s need. They do it with total dedication. On the evening of my arrival, I noticed with concern that the commode in the toilet got choked. It was unusable.

I discovered the issue when the sweeper and the plumber were away for the night. Under the guidance of Manager Ravi, the two waiters worked for long at night and finally cleared this blockage. I will never forget their dedication because it was not the duty of any of these people. Yet they did it without fuss.

As I mentioned before, Friedenstal caters for everyone’s needs. I found three leaves on a small plant hidden in the common grass – an ageing leaf, a mature young leaf and a budding leaf – all attached to the same stem. It appeared to be a symbolic representation of what I was trying to say. 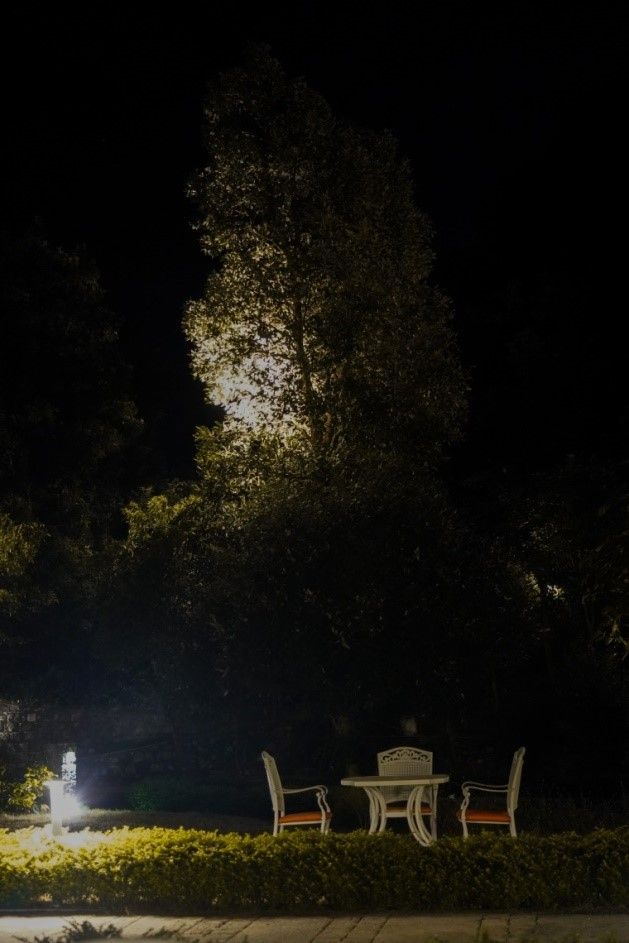 In the end, I would also like to mention three minor points which could add to the comfort of the guests:

Between the living area from the dining area are some concrete steps to climb that are pretty high for older people with knee problems. A handrail fixed there to hold could make the senior citizens’ step-climbing more comfortable.

A tiny patch between the entrance gate and the road has remained uncovered with concrete. It could make the first entry of a guest more welcoming.

The resort works with a bare minimum of working hands. They always chip in to help each other at times of high-pressure work. Despite their sincere efforts, preparing and serving warm and fresh food gets a wee bit delayed. The Management may temporarily consider hiring one or two additional helping hands to tide over the high influx of diners. The diners expect a quick service as in a restaurant. 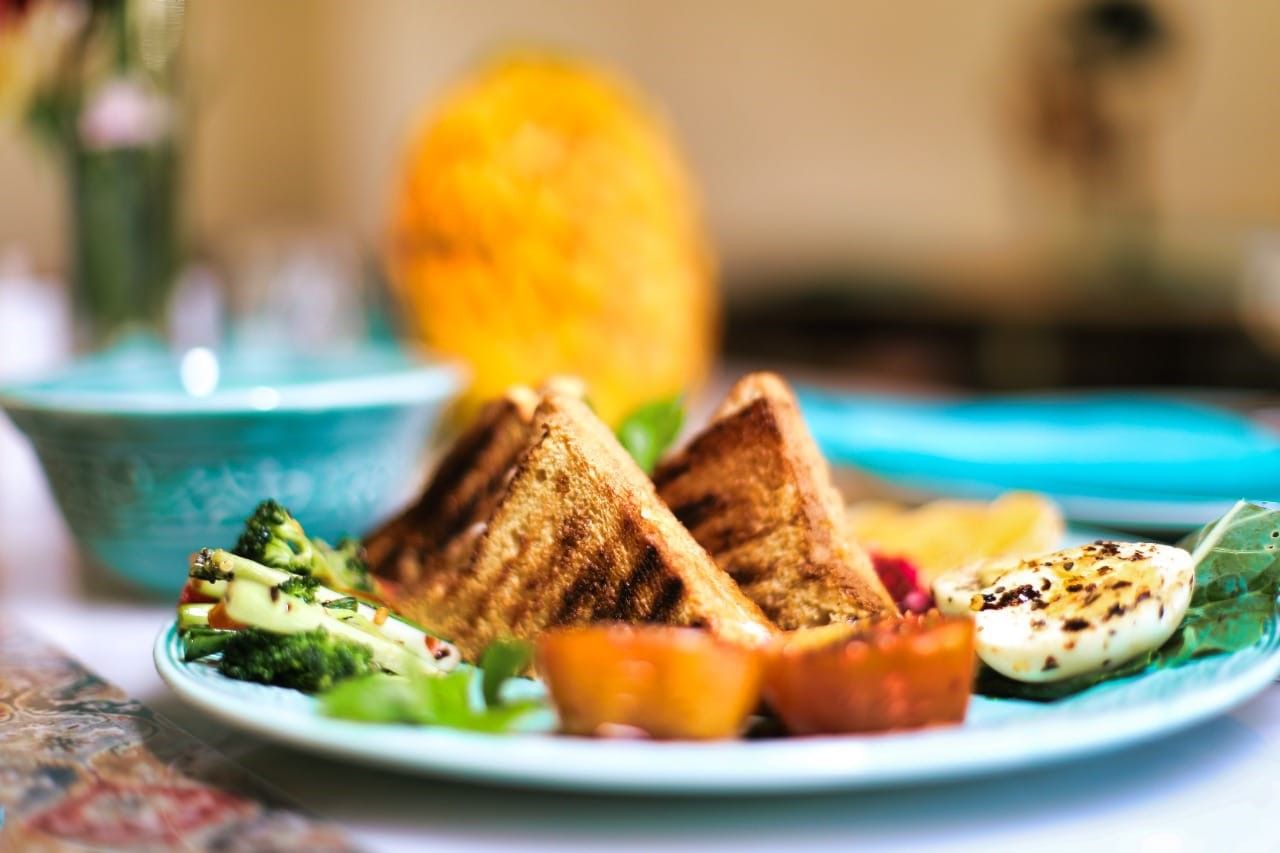 We used to order for the next meal clearly, after finishing one meal and also tell when we would come to the dining hall. This system helped the staff to remain ready for us.

Fridenstal is a hidden beauty which awaits to be discovered. I found a symbolic representation of the same when I noticed a couple of tiny grass flowers.

About the author: Veteran Wing Commander Amit Goswami (75), has settled down in Delhi. But he cannot stay at home for more than six months at a time, since the nature attracts him irresistibly. Sitting in the silence of nature, he believes, is the best way to communicate with God. He drives his car with wife, his soul mate, by his side. Together they explore hundreds of known and lesser known places, that dot the vast expanse of the mighty Himalayas.

Fridenstal is a hidden beauty which awaits to be discovered. I found a symbolic representation of the same when I noticed a couple of tiny grass flowers.

A complete guide to explore Gwalior – experience the royal way

Gwalior in Madhya Pradesh is a destination that should be on your bucket li ... Show more