It was an October 2021 Thursday evening when one of Valsad residing elder friend Girish Bhai called and asked me if I would like to accompany him on trip to Dwarka and Somnath. I was eagerly waiting since months to visit Dwarka and I was unaware of Somnath. He booked train ticket for Friday evening from Valsad to Veraval. 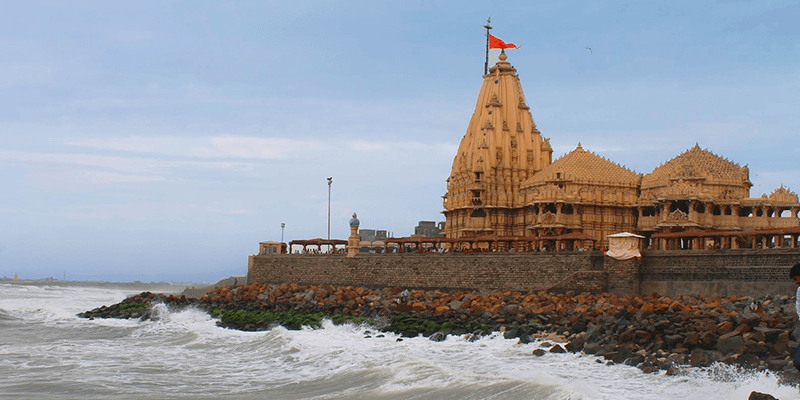 My Dad told me that Somnath is one of the most important temples of India as it is a Jyotirlinga and it was looted and destructed by many invaders like Aurangzeb. The reference of Somnath temple is found in ancient Hindu scriptures including The Bhagvad Geeta. In my head I was all excited for Dwarka and my heart was tuning to the divine Basuri of Lord Krishna. I was excited for the weekend trip in the Saurashtra.

At 4.30 PM our train Bandra Terminus-Veraval Superfast Express arrived at Valsad Railway Platform Number 2. Next Saturday morning around 7.45 AM our train reached the Veraval Railway Station. Somnath Temple is approximately 7 KMs distanced from Veraval Railway station and “special” auto-rickshaws are available near the railway station. I assume bus services are available too.

Somnath Bus Stop and The Temple are proximate where the cab drivers drop the visitors. We both didn’t eat anything after midnight, and he suggested to eat only after the darshan as it will be in sync with the Hindu tradition and culture. When you reach the Bus Stop area many agents will approach you with many accommodation options as per your budget and requirement. There are options of taking a hot water bath for just 100 bucks and visit the temple. We chose a small non-ac room with double-bed and attached bathroom right next to the temple area for just 300 bucks per day. We anyway had to leave in afternoon for Dwarka. After getting ready we headed towards the giant moment of our life with the vibes of “Tere Naam Ki, Jot Ne.. Sara Har Liya Tamas Mera”.

That area and lanes had a historic heritage charm. We were lucky that we visited a week before Diwali and hence it was not crowded. It is said that people stand for hour in queue for the darshan, but we had the fortune to reach the main spot in few minutes. We have to submit our bags, cellphones at the baggage counter at one end of the temple premises. I was happily wondering if the entire temple premises is made with Jodhpur Stone as Jodhpur is my birthplace and special to me.

At the entrance of the temple is Warrior Hamirji Gohil’s statue in his honor. He was a 16-year young Soldier who bravely laid his life to protect the Somnath Temple from the destructive attack of Zafarkhan and Mughals in 1401 AD.

In the premises you would see a statue of Sardar Vallabhai Patel – The Ironman of India. Coincidently it was his Jayanti the very next day which is recognized as National Unity Day. The reason his statue is erected in his honor is because he is the one who took the initiative and completed the administrative task of revamping the new modern-day temple and restored the historic and cultural glory of India after India’s Independence from the British Raj.

Inside the premises you can purchase grains and offer to the birds and squirrels to earn good deeds.

I became lucky and spiritual after the darshan of the first Jyotirlinga that was created by the Lord Moon’s tapasya to escape from a curse of Daksha Prajapati in Sat Yug which was later rebuilt with silver by Ramayan’s antagonist Raavan who was Mahadev Bhakt in Treta Yug, later by Lord Krishna in Dvarpa Yug and Emperor Vikramaditya in Kalyug. Was I being blessed by Lord Mahadev? Was it written in my Destiny? Mera Karm Tu Hi Jaane Kya Bura Hai Kya Bhala.

Inside the temple near the Jyotirlinga, you have an option to purchase a small bottle of Ganga Jal for 45 bucks. We both bought two and offered to the God of the Gods.

I was really awestruck by the magnificent beauty of the Arabian Sea behind the temple. Having lived at Dahanu, Mumbai and Valsad which are located seashores and been to places like Goa and Daman, beaches never attract me, especially the ones at the Arabian Sea. But this is something exceptional. The calm, the natural beauty, the opulence, and the serenity. My friend told me that no matter how many cyclones occur they just take a u-turn from this area and never happen here nor cause any damage. This place is blessed with the spiritual powers. There was a beautiful passage where you can walk and cycle, where we didn’t go. We spent some time in the garden area in front of the main temple and admiring the magnificence and greatness of the place and Lord Shiva.

Before leaving, I did a video-call to my parents to show them the temple from a distance.

After having snacks and tea, we hired an auto-rickshaw for 400 bucks for two hours to visit other places. First we went to the Bhalka Tirth where Lord Krishna was hit by an arrow on his ankle causing fatal injury. A temple is erected in his honor and the tree where he was resting is still preserved. Right next to it is Ram Dhun Temple. The main Ram Dhun Temple is in Jamnagar where continuously for more than 5 decades Lord Ram’s name is chanted and created a world record.

We then proceeded to Banganga Beach where there are three Shivlings in the sea. Be careful of the slippery fungus on the rocks at the seashore if you plan to go near the Shivlings. This particular spot got the name ‘Ban Ganga’ because it is said that the arrow from this very spot was shot that caused fatal injury to Dwarkadish. The hunter misinterpreted his feet to be of a deer.

After this we visited the Triveni Sangam of Hiran, Kapila and Saraswati rivers. We can purchase fodder and offer to the fish, birds and cows in that area.

Nearby there is a temple of deity Hinglaj Mata. A priest there informed us that She is considered to be the Kuldevi of Pandavas and they had visited here once for her darshan. There is a narrow cave to visit the Hinglaj Mata darshan place. Near the river is also Gita Temple and some more temples with a beautiful natural beauty.

We had a bus at 12.40 PM for Dwarka hence we left quickly. We grabbed sandwich for munching. Near the lodge and the Somnath Temple was a museum which we couldn’t visit due to lack of time. Also I have heard from people that Camel Rides at the beach in Somnath are popular.

If you are a Mahadev Bhakt, History Lover, Cultural Lover, or Traveler, I highly recommend you visit to Somnath and Dwarka. It is budget friendly too. Also, if you are here do try Sev Tomato Sabji (vegetable) and Bajra Rotla for lunch or dinner at any good restaurant or dhaba.

It was an October 2021 Thursday evening when one of Valsad residing elder friend Girish Bhai called and asked me if I would like to accompany him on trip to Dwarka and Somnath. I was eagerly waiting since months to visit Dwarka and I was unaware of Somnath. He booked train ticket for Friday evening from Valsad to Veraval.