Parnera Hill in Valsad is a beautiful destiny with historic, natural, religious, and touring significance. If you reside in areas like Surat, Bilimora, Navsari, Vapi, Dahanu, Boisar and Palghar, you can make a weekend getaway in Parnera hill. Parnera hill’s height from ground level is 152 meters and can be climbed through steps hiking in 45 minutes to 50 minutes by an average person. It has two main entrances, one from Parnera town and another from the Atul town. Both have their own unique view. Both the entrances are well connected with road and highway and the nearest railway station are Valsad, Pardi and Atul. From Valsad, the Parnerna town entrance is approximately at 6 KMs and the Atul one at 10 KMs.

As per localities, the Parnera Fort was built by a Hindu King of Dharampur province in the 15th century. Sultan Muhammad Shah Begda invaded and attacked the fort and won. In 16th century, Portuguese of Daman attacked and destroyed the Fort. After that, in 1670, passing back after Surat raid, Chatrapati Shivaji Maharaj had a small war here and in 1696 he appointed Shree Moro Pandit as the commander in chief of Peshwa kingdom. In 1780, Gayakwad rulers of Vadodara occupied the Fort. After this Peshwa Balaji Bajirao fought for this Fort. Later East India Company took possession of the fort with Lt. Wales in command and mobilized the military to handle the torture of Pindharas. During 1857 nationwide historic rebellion initiated by Jhansi Rani Laxmi Bai, the Fort faced a huge damage. 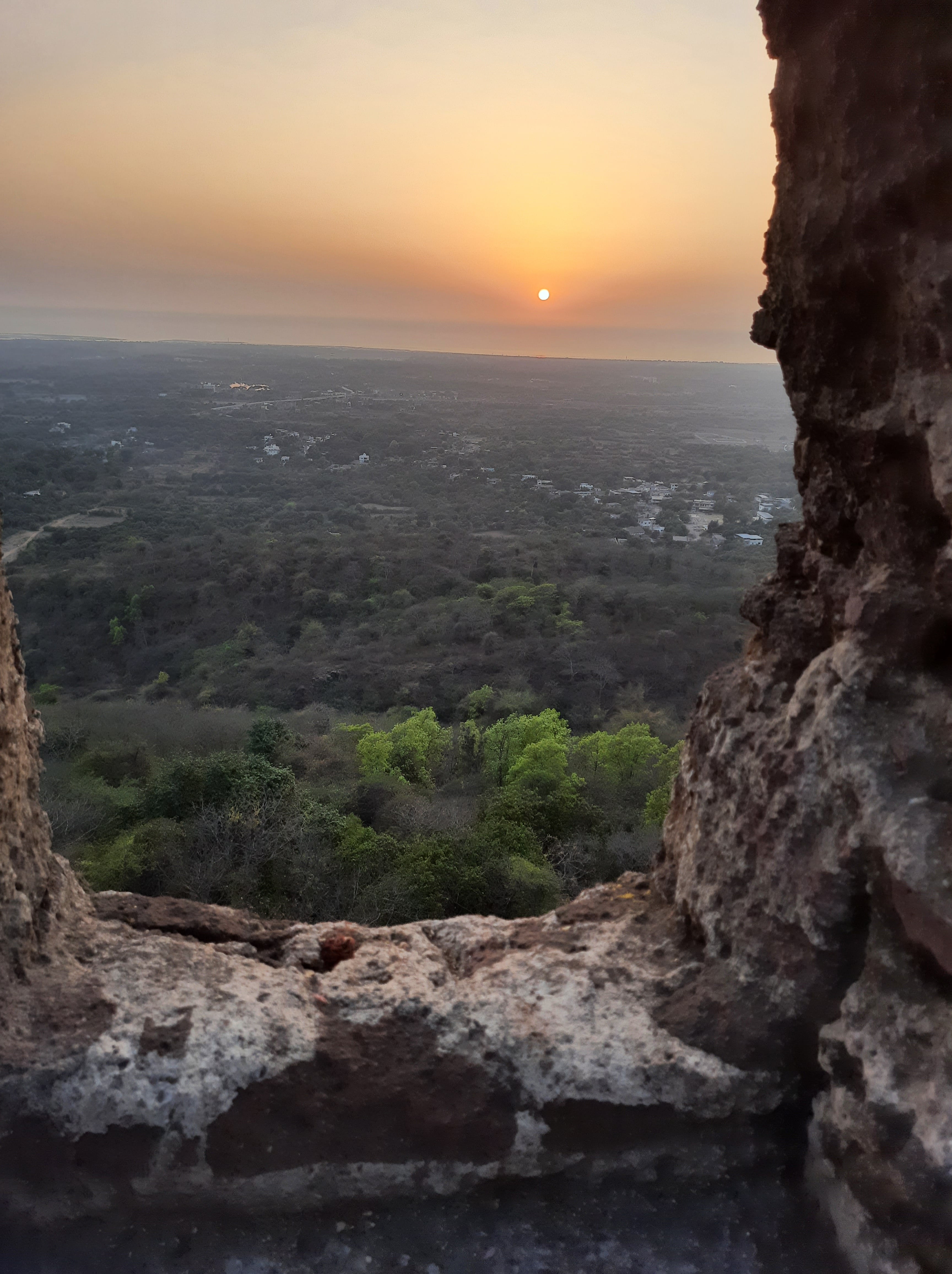 As per a folklore, Chattrapati Shivaji Maharaj jumped on his horse for a huge distance from the Hill’s passage. Some locals have told me that the reason the river near hill is called ‘Par River’ or ‘Par Nadi’ is because Chatrapati Shivaji Maharaj had passed by it. A poet has penned a ballad in Gujarati with the title ‘Parnera Ni Lol’ describing the 7-day war between Peshwas led by Bajirao and Gayankwad of Vadodara. Some boards from Atul side footsteps have mentioned some portions of the history of Parnera Fort and Hill. 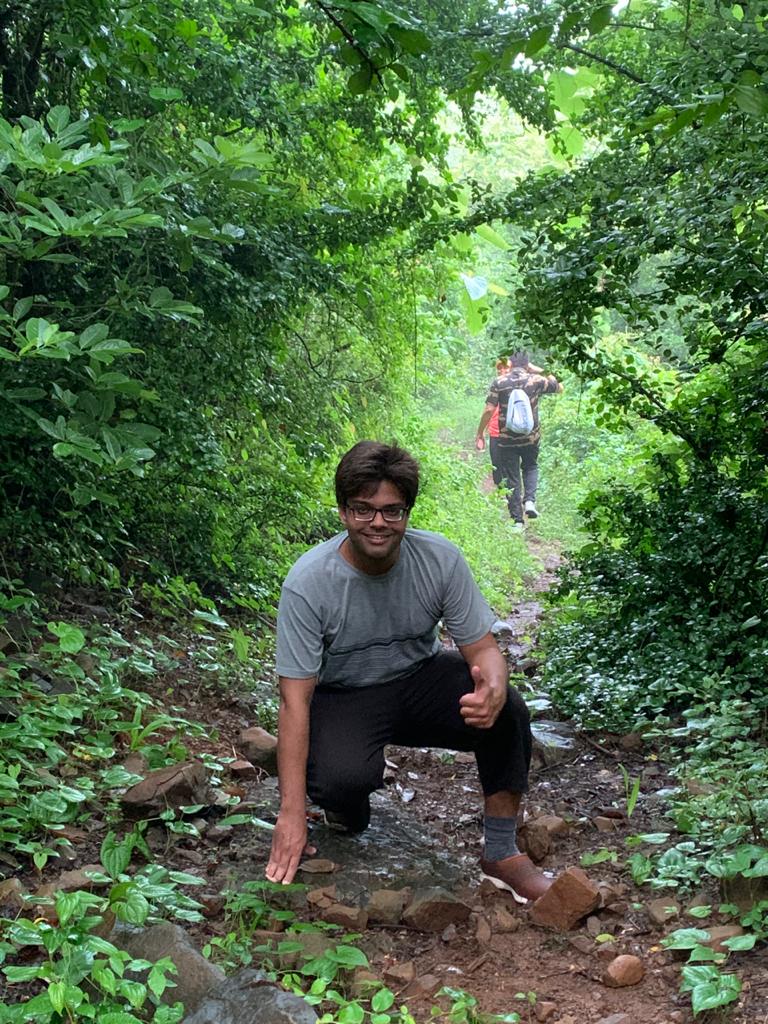 I remember my first hike here was on 15th August 2020 when I had recently moved to Valsad. It was a rainy day, and I loved the view from there. I saluted the National Flag. I have hiked a lot on this hill since September 2020. On an average, twice a week. From both sides, Parnera and Atul. Sometimes solo, sometimes with friends and sometimes with group members of Sunday Sports Club, a Valsad-based local sports club spearheaded by Naresh Kaka. Thrice I have done trekking here with the Sunday Sports Club and it has been an amazing experience. 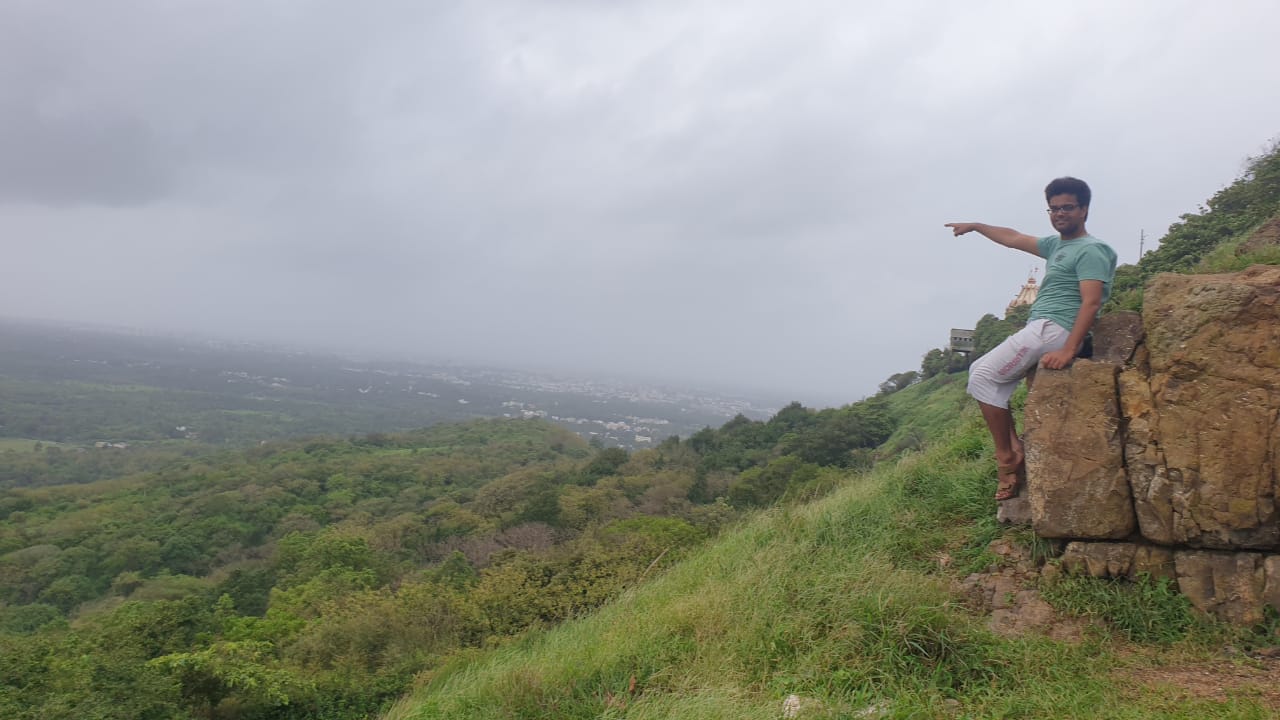 The hill has Chamunda Mata Temple, Lord Hanuman Temple, Lord Mahadev Temple and Kali Mata Temple. There is also a Dargah of Chand Pir Baba who was martyred during a fight.

Every morning there is aarti ritual conducted at the Chamunda Mata Temple and in evenings too. Some nearby people visit regularly for the darshan and aarti. The visitors’ statistics increase a lot during Chaitra (first month of Hindu Calendar) Navratri and Kartik Navratri, the one before Dusserah. Garba dance is quite popular here, as it is across Gujarat.

From the hill, on one side you can see Atul Factory and beyond it is Par River. On the western direction you can witness the opulent Arabian Sea. Sunsets are great at times. Once during early morning hiking, I witnessed my first moon-set in Valsad and Moon’s light gives a silver color to the distanced waves of the Arabian Sea. There is a railway track too and at times you can spectacle trains passing-by the huge landscape. Before that you can see some roads and homes of towns nearby. On the east side you can see high-way and some portions of Pardi, Atul and Valsad towns.

During monsoon it is occupied with greenery. I love to visit it in November, December and January months. I would suggest avoiding hiking or trekking in summer afternoons. Some people regularly visit here for fitness and religious purpose. There are few regular faces I see almost every time during my visit. Two top management people of Atul Company visit it daily, hiking from Atul side, getting down to Parnera side and climbing back and getting back at the base of Atul. I have heard from localities that they rarely miss their routine of hiking.

Parnera Hill is blessed with rich trees and plants. Atul Company looks after some plants as a part of their CSR Activity. One of my elder local friend Ashish Patel has taken responsibility to plant trees at northern portion of the Parnera Hill and has planted over 200 trees in 5 years with the help of his friends. He regularly waters them and takes care of them. Some localities have made arrangements of plastic water vessel for Birds at the footsteps of the hill. At times you can spot colorful birds of varying species. Twice I witnessed peacock. On the hill, near temple at a walking passage, on a water body below you can see lotus and tortoise. You can see trees like Mango, Gulmohar, Pipal, Coconut, Banayan among others spread across the hill.

It is a great place to hangout with friends and family. You can choose your time, early morning, or evenings. Some people bring tents for camping to spend a night, but it is absolutely at personal risk. Couples can consider it a romantic place for a date and weekend getaway. According to me, the best time to visit is from October to February. Many times, this place has been a stressbuster for me after hectic office hours.

Devesh Purohit is a Mumbai-based PR Professional. He likes traveling and sharing his navigation experiences.

Parnera Hill in Valsad is a beautiful destiny with historic, natural, religious, and touring significance. If you reside in areas like Surat, Bilimora, Navsari, Vapi, Dahanu, Boisar and Palghar, you can make a weekend getaway in Parnera hill.